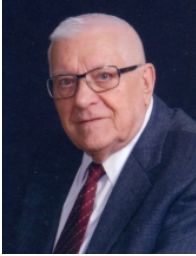 To read this Obituary in it’s original source, share a memory, plant a tree, or send flowers, please click here.

On October 24, 2022, Frederick Russell Stephan passed away at Woodland Terrace in Bridgman, MI, at the age of 94 awaiting the second coming of his beloved Savior.

Fred was born on June 4, 1928, in Grand Rapids, MI. He was the fourth of six children all of whom preceded him in death, including his younger brothers Ralph Stephan and James Stephan and older siblings Alice Clapp, Christian Stephan, and Gertrude Bigorowski.

Fred met his wife Sylvia (Wente) while attending Emmanuel Missionary College in Berrien Springs, MI. Upon graduating from there, Fred and Sylvia went to Wisconsin where he pastored for the Seventh-day Adventist Church from 1955 to 1960. During this time, their first child Brian was born in Eau Claire, and four years later Elise was born in Green Bay.

In retirement, Fred and Sylvia found extra time to travel and visit family. They also loved to volunteer at the Miller Farm, a historical farm, in upper state New York. After Sylvia became too ill to travel, Fred faithfully cared for her until she preceded him in death in 2014.

Fred was a loving father to their three children who survive him, F. Brian Stephan (Cindy), Elise Damron (Don), and Jill Simon (Matthew). Fred also leaves behind 7 grandchildren and 7 great-grandchildren. Fred loved his family and made sure to spend individual time each week with each child. Holidays were always made extra enjoyable with treats he helped prepare such as popcorn balls and caramels, and Sabbaths were welcomed each week with a special family worship. When grandchildren came, his love extended to them as well. Each grandchild cherishes special memories with their grandpa like receiving special packages in the mail.

The family and all those who knew him will greatly miss him, but we have a blessed hope. “For the Lord Himself will descend from heaven with a shout, with the voice of an archangel, and with the trumpet of God. And the dead in Christ will rise first. Then we who are alive and remain shall be caught up together with them in the clouds to meet the Lord in the air” I Thessalonians 4:17 (NKJV).

A memorial service honoring his life will be held on Saturday, November 12, 2022, at 3:30 P.M. in the Youth Chapel at Pioneer Memorial Church in Berrien Springs, MI. You may join the service livestreamed at pmchurch.org/specialevents.

Messages and memories may be shared online at www.allredfuneralhome.com.

If you wish to make a donation in Fred’s honor, please go to https://adventistgiving.org/#/org/ANFFFF/envelope/start. It will take you to a Michigan Conference electronic tithe envelope. Just scroll down until you find Christian Education Scholarship Endowment, a scholarship to help low-income families afford K-12 Adventist education, and fill in the amount of your donation.